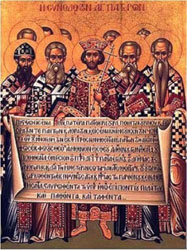 Another snippet from my slowly evolving book on Coptic Christianity:

As we saw above, the very name of the Church, “Orthodox” (straight or true worship or belief) itself emphasises the importance of holding to a faith, believing that which is true and correct. Christianity is founded fundamentally on Truth. Jesus Christ Himself was recognised as “full of grace and truth” (John 1:14) and “teaching the way of God in truth” (Mark 12:14). He described Himself as “the way, the truth, and the life” (John 14:6) and promised those who follow Him the “Spirit of Truth” (John 16:13). He commands us to “worship the Father in spirit and truth” (John 4:23) and He teaches that “you shall know the truth, and the truth shall make you free” (John 8:32).

Truth should be one of the chief motivators for the Christian life. The teachings of Christ resonate with the human spirit because they have an intrinsic tone of truth to them. For example, love is the central theme in the teaching of Christ, yet even apart from that teaching, people of every age and every culture have always seemed to feel instinctively in their hearts the truth that love is the most important thing in life. Thus most people put their family above their career or popularity in importance, and might even be willing to give up their own life for those whom they love.

Yet the beauty of Christian truth is that it takes this basic human reality and extends it into areas beyond our merely human instincts. Christ taught not only basic human love, but divine love, a love that elevates the truth that love is paramount to noble and life-changing heights. For example, He taught that it is not enough to merely love our friends or relatives, but that we must also love strangers and even enemies. Here, the truth of Christ becomes counter-intuitive; it goes against the grain of human nature. And yet, it works! This kind of unconditional love, when practiced sincerely and properly, transforms not only the individual’s life, but whole societies.

This truth about love was reflected, one might say, embodied, in the person and the life of Christ Himself. By becoming a human man, by dying on the cross, by rising from the dead, by all the events of His life, He showed His great love for the feeble human creatures He had created in His own image, and who had abused their free will to their own hurt and detriment. This beautiful story of love and salvation is most clearly and succinctly told in the ancient statement of Christian belief that summarises these truths about our existence and our relationship to the one who created us; the Nicene-Constantinopolitan Creed.

However, over the years, the significance of this universal Creed has evolved differently in the various branches of Christianity. I shall share with you my own rather simplified impression of this difference, though the reader who wishes a more detailed perspective will find it in some of the references provided at the end of this book. Put simply, Western Christians of the past five centuries have disagreed over which of two attitudes to the Creed is the right one. Roman Catholics have emphasised the importance of works in attaining salvation; actions and deeds like partaking of church sacraments, praying and giving charity. Protestants, in reaction against what they perceive to be an overemphasis of the role of humanity in creating its own salvation, instead emphasise the priority of faith for salvation; focusing on verses like this:

“…if you confess with your mouth the Lord Jesus and believe in your heart that God has raised Him from the dead, you will be saved.”

Thus says the Protestant, is one saved: not through one’s own effort and ability, not through doing good things, but merely through believing in Christ. Evangelical Protestants for example will heavily focus on the public confession of faith as guaranteeing your salvation. That is not to say that “faith first” cancels out works, for if faith is sincere, then the works will follow. Nor does the Catholic cancel out faith, for good works must come from a sincere faith or else they will be hypocritical and unacceptable before God. So we have this simple contrast:

Where does Orthodoxy fit into all this? While the Coptic Church has been somewhat influenced over the past few centuries by Western missionaries who brought to Egypt a Western theology, the true ancient theology of salvation has always survived, and is becoming more and more prominent in recent years, due to the sudden explosion of availability of the writings of the ancient Christians that has been made possible by the internet. An ancient Christian would probably have thought that this conflict between doing and believing is missing the real point. What you do is not the most important thing, nor the thing that comes first. Neither is what you believe. Both of these depend on something far deeper: being.

For the ancient Christian, the thing that most defines you as a Christian is not what you do or what you believe, but what you are. The ancient Christian idea of salvation focused upon our nature as human beings. Humanity was created in the image of God, but fell from this image and was corrupted and defaced. Salvation is about restoring that image of God in humanity once more, and about saving humans and the world God created for them from the corruption that ruled over them. Being in the image of God, the God of love, is what it is all about, and both faith and works flow from this naturally and complement and express this image of God.

It is possible to believe that Jesus Christ is the Son of God and the Saviour of humanity, and yet still not be Christian. These are all things that even demons know and believe, though it does them no good, for they have corrupted their being so that they rejected the love of God in themselves.

“You believe that there is one God. You do well. Even the demons believe—and tremble!”

It is also possible to do all the good works one could imagine yet still find no salvation. For example, the motivation for such works may be suspect. The scribes and Pharisees of Jesus’ time did many good works, carefully obeying the law of Moses to the letter, yet He saw through their apparent righteousness and pointed out that it was based on selfish motivations of vanity and popularity. He warned them that they had no eternal future with Him.

“…then you will begin to say, We ate and drank in Your presence, and You taught in our streets. But He will say, I tell you I do not know you, where you are from. Depart from Me, all you workers of iniquity.”

What is missing in each of these scenarios? What is missing is the being in the image of the God of love. The true Christian is not the one who has only the right faith or the right actions, but the one who has been transformed into the right kind of creature, the being-of-love. From this nature flows naturally, like water from a spring, the love of Truth, which leads her to the true faith; and the love of God and all His creation, which leads her to good works.

The chief practical benefit of this emphasis is that it leaves no room for hypocrisy: one cannot be truly in the image of God and yet not be saved, whereas as we have seen, it is quite possible, perhaps sadly common, that Christians can have the right faith or do the right things yet actually be quite far from God. The ancient Christian (and modern Orthodox) emphasis on being makes that impossible.

And it is in this spirit that the Orthodox Christian reads the Creed. The Creed is much more than just a set of intellectual propositions or concepts for us to grasp with our minds and then agree to. Even demons agree with the Creed – they cannot deny its truth, although it frightens them. Nor is the Creed meant to merely provide us a guideline for what we should do, how we should live our lives so that we merit entrance into the eternal blessedness. That would be a selfish process of trying to line our coffers for the future and unworthy of the God who is unselfish love by His very essence. Rather the Creed tells us who we should be, the kind of being we should be. The truths it contains should transform us, change us, turn us upside down and inside out, shatter us into a myriad little pieces and put us back together again in the original form God had always intended for us.