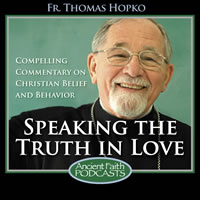 I’ve been listening to some terrific podcasts by Fr Thomas Hopko, an Eastern Orthodox scholar and parish priest. It is a series on the clergy of the Christian Church through the ages and begins in the Apostolic Age, working its way slowly through the centuries. For anyone who loves ancient Christianity, and who desires to live the Orthodox Christian faith today as closely as possible to its original form in ancient times, this set of talks is a veritable treasure chest! Keep in mind when you listen that Fr Thomas is from the Eastern Orthodox family and thus views the Council of Chalcedon from that perspective. (While the Oriental Orthodox Churches like the Coptic Church reject that Council, most other Christian Churches accept it).

But his account of the first two centuries is engrossing and makes sense of so many things in our history that we generally hear in isolation and out of context. For example, one can gain a valuable insight into the true spirit of ancient Christian leadership when one learns that the titles for the leaders of the ancient Church were actually taken from the titles of slaves! The Episkopos (over-seer) was the household slave in charge of overseeing the affairs of the household on behalf of his master, and for the welfare and benefit of the master and his family. Episkopos is the title the early Christians adopted for their bishops. The Economos was in charge making sure the ‘economy’ of the house ran smoothly, and thus would look to the day to day details of household provisions and accounts and so on. His role was to preovide the resources that everyone else needed to live their lives happily and safely. Again, the early Christians adopted this name for those among the Elders (‘presbyteros’ ) who were entrusted with caring for the day to day affairs of the household of God, and ‘economos’ has evolved into the modern title, ‘hegomen’.

But note that both these positions were those of slaves. Applied to the Christian roles, what this meant is that the bishop and the hegomen were both ‘slaves’ of the Master of the household, God, and their role was to care for His children. As slaves, they were not to boss the children around or exert authority over them so much as to serve them and provide faithfully for all their needs. And this is of course in keeping with the command of Christ:

But Jesus called them to Himself and said to them, “You know that those who are considered rulers over the Gentiles lord it over them, and their great ones exercise authority over them. Yet it shall not be so among you; but whoever desires to become great among you shall be your servant. And whoever of you desires to be first shall be slave of all. For even the Son of Man did not come to be served, but to serve, and to give His life a ransom for many.” Mark 10:42-45

It also intriguing to hear about the developments in the years after Chalcedon, a period of history in which we Copts were not involved for the most part – being more occupied with things like survival in a hostile environment of Melkites and later Muslims. Here, this account explains so much of why both the Catholic and the Eastern Orthodox Churches are what they are today. Of particular interest I found the account of the dispute over whether clergy were allowed to marry. In the west, radiating from Spain, apparently, was the idea that even parish priest must be celibate. But the East held on to the ancient tradition that these clergy may be married before their ordination, although they may not marry once they have in fact been ordained (so, for example, if a priest’s wife dies, he may not remarry).

On a related topic, his exposition on the history and theology of speaking in tongues, “The Gift, the Gifts, and Glossolalia” (released10 July 2011 ) is scholarly yet easily digestible and provides some valuable insights into this controversial topic.

For those who still prefer the written word to the spoken, a mind-expanding book you must read is “The Atheist Delusion: The Christian Revolution and its Fashionable Enemies” by David Bentley Hart. This book was the basis for much of the second talk (by Samuel) at the “Why Christianity?” Day yesterday. Hart, in spite of his Western name, is a convert to Eastern Orthodox Christianity and a highly respected and widely published scholar. He is particularly interested in Patristics, St Gregory of Nyssa and St Maximus the Confessor being two of his foci.

The book was awarded the Michael Ramsey prize in Theology earlier this year. Hart mercilessly dissects the arguments of the New Atheists like Dawkins, Hitchens and Dennett and exposes the faults in both their reasoning and their factual foundations.

As only a historian can, he paints a vivid picture of the heathen world into which Christianity was born. I had never before realised just how revolutionary Jesus and His followers were. Things we now take for granted, like equality of all humans and the value of every human life, turn out to be, by Hart’s account, innovations due solely to Christianity. Had Christ not come, there is every chance that we might still be living in a horrible multi-level society where the suffering masses exist only to serve the elite few.

Bible verses to which we have grown accustomed through long usage take on new and unexpected meaning in this setting. For example, I have long considered Christ’s claim that whenever we do an act of kindness to the sick, the poor or the imprisoned we are doing it to Him personally as a given (Matthew chapter 25). In fact, such a claim was, believe it or not, one of the main reasons the pagans persecuted the Christians so violently. The assertion that we should identify God (incarnate) with the lowest level of unfortunates in society undermined the very foundations of pagan civilisation.

All these ‘advanced’ societies – Greek, Egyptian, Roman, Chinese – depended upon the idea of a hierarchy, with the great God at the very top, down through levels of lesser gods, various human social levels,and finally down to the poor, the sick, the slaves and the criminals at the very bottom. At the top of the human levels of this hierarchy were the rulers, the rich and the priests. All the levels below them existed to serve them and to meet their needs. Thus for example, when an important Egyptian died, it was not unusual for his servants to be buried alive with him, since their lives only mattered so long as he lived. Once the master was dead, the servants became worthless.

But by coming down from Heaven and becoming one with this lowest level of society, Jesus was turning this whole system on its head. The pagan rulers and priests could not possibly tolerate this! Pagan philosophers like Celsus railed against the Christians: how could they demean themselves so horribly as to help or even speak with the rabble and the riff raff?! Is it any wonder that the earliest Christians were so opposed to paganism? And of course, these facts of history totally demolish the arguments of the New Atheists that Christianity has been a force for evil in the world and that the world would be so much better off without it.

I would enjoy reading your comments on this or any other books you may have enjoyed.