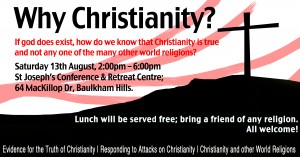 IMPORTANT – CHANGE OF VENUE:
“Why Christianity?” will not be held at St Joseph’s
Instead it will be held at
St Abanoub Youth Centre
49 Fourth Ave, Blacktown
All other details remain the same.

I have discussed that challenge with many people over the years. On the face of it, it sounds pretty convincing. But that’s only on the face of it. When we dig a little deeper, you might be surprised at just how strong the case for Christianity against that of all other religions.

Now there are some who will say that we shouldn’t even be considering a question like this, that it is dangerous and might weaken the faith of some, or that it is disrespectful or blasphemous to even think about such things. But I follow the principle that if Christianity is true, then you should be able to throw anything at it, absolutely anything at all, and it should be able to stand up to it. If it can’t, then I want to know, by gum! That is, if I really care about Truth; and Truth is the very thing that Jesus not only promised would set us free, but even used as His own title (“I am the Way, the Truth and the Life”).

But it turns out that those who worry need not do so. Christianity is unique in so many ways that it really does stand alone among all the religions of the world. I know that’s a politically incorrect thing to say nowadays, but I believe it is true.

Next Saturday, we hope to explore this topic in some depth. St Abanoub’s Church, Archangel Michael Church and the Coptic Apologetics Group are organising a day where we will examine the question: “Given that God exists, why should we believe that Christianity is the right faith in contrast with all the other faiths in the world?” Last year we had an Atheism Day where we looked at the arguments for and against the existence of God. The ‘Why Christianity’ Day is the logical follow up to that.

Just to whet your appetite, here are some of the reasons why I find Christianity to be quite worthy of the title, “The True Faith”. Each one is strongly supported by powerful evidence. Sure, some of the other religions may have one or two of the characteristics below, but none of them come even close to having the complete set – except Christianity …

If you will be in Sydney next Saturday and would like to flesh out these and many other ideas and engage in stimulating and completely open discussion about them, please come along next Saturday. No question is off limits (so long as you’re polite). You can find details on facebook.

4 Replies to “Why Christianity?”