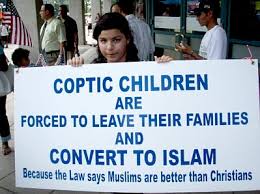 Things have escalated rather rapidly.

It seems that the Iraqi branch of Al Qaeda has taken it personally that two wives of Coptic priests who allegedly converted to Islam have been ‘kidnapped’ by the Church, and have called for their immediate release. If not, they say, prepare to face some serious consequences. They have called on Muslims all over the world to put bombs in Coptic Churches.

Never mind that so far as the objective evidence shows, the two women in question NEVER converted to Islam. One of them not only went on national television to state that, but was also supported by an official statement from Al Azhar mosque that confirming that she never became Muslim (read here). The issues of these two women were patently of a personal and not a religious nature and seem now to have been more or less resolved. Given that these issues actually flared up some years ago (around 2004, I believe) one wonders why Iraqi Al Qaeda have suddenly gotten so worked up about private Egyptian matters years after the event? The answer is most likely that these ladies are just an excuse.

Consider the outright hypocrisy. Is Al Qaeda genuinely concerned that these two ladies should have freedom to practice the religion of their choice? Had that been the case, then why do they not protest against the hundreds, perhaps thousands of abductions of innocent Christian girls and their forced conversion to Islam? Surely what’s good for the goose is good for the gander?

No, Al Qaeda, and fanatics in general do not care for things like religious freedom. They not even really care about their own religion, Islam. What they care about is tribalism. They are simply living out the outdated culture of the Arabian desert, where one defended one’s tribe at any cost. And one strove by all possible means to make one’s tribe superior to others, to have control over others. No insult to the tribe could be tolerated, for it wounded the tribe’s reputation and honour, and had to be defended.

The service of Fr Zakaria Botros on the internet, through which he has inspired thousands of conversions from Islam to Christianity, has cut this desert sense of honour very deeply indeed. Muslim fanatics have tried everything to stop him, including putting a bounty of $60,000,000 on his head, but all to no avail as he continues to elude them, much like Osama Bin Laden himself continues to elude the West, in fact. The big difference between Bin Laden and Fr Zakaria is that one wins souls through love, rational argument and free conviction while the other strives bring his enemies to their knees through sheer brute force and violence. History will decide which strategy works best.

What has the world come to when a man of peace and love like Pope Shenouda has to have metal detectors at the doors of the cathedral to prevent him being attacked during his weekly sermon? Again, the question that begs to be answered is: Why is the decent minded Muslims majority silent? In a bizarre twist, it was the Egyptian Muslim Brotherhood who came out strongest among the Muslim community against the attacks in Iraq and the threatened attacks on Coptic Churches. The Egyptian Government also issued strong statements rejecting being held hostage to terrorist threats. For this, both are to be applauded. But the fact remains that terrorists and fanatics like those in Iraq can only thrive within a community that allows them to do so. There is a time-worn adage that bad things happen because good people allow them to happen. Sometimes, good people are silent because they fear violence themselves, but sometimes they are silent because they just think it’s none of their business. The Iraqi Al Qaeda fanatics could never have done what they have had they been pressured by the society around them not to be so fanatical.

Let all people of good conscience pray for the peaceful resolution of this crisis.

The pursuit of Fr Zakaria: http://www.jihadwatch.org/2008/09/al-qaeda-declares-coptic-priest-zakaria-botros-one-of-the-most-wanted-infidels-in-the-world.html

4 Replies to “Fanatical Drive Against Copts”