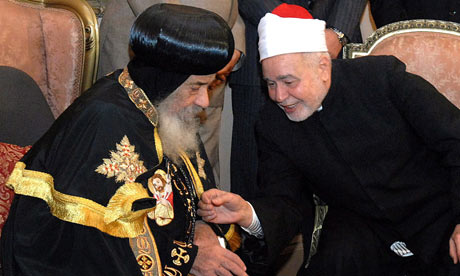 Having enjoyed tremendously The Early Coptic Papacy: The Egyptian Church and Its Leadership in Late Antiquity (Popes of Egypt) by Stephen J. Davis, I was quite excited when I learned that Volume 2 had been published. Entitled The Coptic Papacy in Islamic Egypt: The Popes of Egypt: A History of the Coptic Church and Its Patriarchs Volume 2 and authored by Mark N. Swanson, it makes for absorbing reading – if you are into history and the Coptic Church, that is. Now, the History of the Patriarchs is accessible on the net*, but it is only one among many primary and secondary sources that the author has drawn upon to provide a more comprehensive picture of the Coptic Church during the Islamic era. He has also added to his well-balanced scholarship some very insightful remarks on the patterns and lessons that may be drawn from this history. It is always interesting to see what an ‘outsider’ thinks of our Church.

One of the things that really struck me as I read through the centuries was just how much more the words of some of our prayers mean if you think of the circumstances in which they were prayed back then. As you develop in your mind a picture of the pressures that were applied to Egyptian Christians a thousand years ago, you get a sense of a Church struggling just to stay alive. Heavy taxes on non-Muslims could only be relieved by converting to Islam, a course sadly taken by many Copts. Humiliating rules like being allowed to wear only black or dark blue clothes and turbans (the origin of today’s priestly uniform) and riding only donkeys, not horses, further pressured the Copts of the time. Added to this was the often blatant discrimination in the workplace, and the glass ceiling that prevented Christians from holding any kind of worthwhile position in government or in commerce. And then there was stifling burden that Muslim rulers imposed on virtually every new Patriarch upon his consecration: a one off tax of huge proportions that forced many patriarchs to spend their days wandering around the country collecting donations just to keep the peace for the flock and their Church. Many patriarchs who failed to satisfy the Muslim ruler’s greed found themselves in prison for lengthy periods of time.

Some of the events are deeply saddening, like ambitious Christians who played the political game to gain personal advantages, even if that meant that their fellow Christians suffered, or the reign of Pope Kyrollos III Ibn Loqloq, whose selfish ambition for the papacy should have warned the Church not to elevate him to that exalted position. Among other things, he freely and openly resorted to simony (taking bribes in return for ordination of bishops and priests) to pay his debts to the Caliph, but also to amass his own treasure of personal wealth.

But there are more stories that fill one’s heart with hope and joy, such as the era of Pope Matthew I The Poor, a saintly man of true humility and genuine Christian compassion who was respected by all, even the Muslim ruler of the time, Barquq. In his time also arose other saintly personalities who, as the author puts it, became like a symphony orchestra of sanctity with the patriarch acting as its conductor. Among these was the ascetic and boldly courageous Anba Rewais, who has given his name to the site of the modern Cathedral of St Mark in Cairo.

These true tales are all the more poignant in these days of trouble for the Church of Egypt. Hearing about threats and accusations being brought against our beloved Pope Shenouda by Muslim extremists evokes an eerie sense of history repeating itself.  Sadly, rational and decent Muslims, like the late Sheik Al Tantawi (see picture: http://www.guardian.co.uk/world/2010/mar/10/sheikh-mohammed-tantawi-obituary) are being drowned out by the shouts and clamour of radical, narrow minded Islamic extremism, and the bad old days seem to be coming back to haunt the twenty first century.

“Remember O Lord, the peace of Your one only holy catholic and apostolic Church … O King of Peace, grant us Your peace …”

“Remember O Lord, our Patriarch, Pope Abba Shenouda III … In keeping, keep him for us for many years and peaceful times … grant them and us peace and safety in every place … All their enemies, seen and unseen, do trample and humiliate under their feet speedily. As for them, keep them in peace and righteousness in Your Holy Church”

“Remember O Lord, our congregations, bless them … Grant that they may be unto us without obstacle or hindrance, according to Your holy and blessed will … Satan and all his evil powers do trample and humiliate under our feet speedily … The enemies of Your holy Church, O Lord, as at all times, now also humiliate. Strip their vanity, show them their weakness speedily. Bring to nought their envy, their intrigues, their madness, their wickedness and their slander which they commit against us. O Lord, bring them all to no avail, and disperse their counsel O God, who dispersed the counsel of Ahithophel … Arise Lord God, let all your enemies be scattered, let those that hate Your holy name flee before Your face…”

I used to think of purely spiritual enemies when I prayed these prayers – you know, the devil and his armies, his temptations and enticements. Living in a democratic and tolerant land where freedom of religion is guaranteed to all and one can pray and live in peace; that was the only enemy I could really relate to. But having been reminded by this book of the far more tangible threats Copts have endured, together with the ever more frightening news coming out of Egypt, I can really feel the honest emotion in these words. I imagine myself being a priest in Old Cairo, say, in the eleventh century; oppressed and persecuted together with my longsuffering flock, and I can see how these words can bring great comfort, for they remind us that in the end, God is in control, and that there is no power greater than His. The very existence of the Coptic Church against all odds is testimony to that enduring truth.

Please pray for our fellow Copts in Egypt, and especially for His Holiness Pope Shenouda and all the other faithful servants of Christ. He has already suffered years of exile during the reign of President Sadat, and has worked tirelessly, and often thanklessly to preserve and promote peace in Egypt between the Muslim majority and the Christian minority. He really does not deserve all this in his twilight years.

If you are unaware of the recent events in Egypt, here are a few links that summarise the main issues and events:

* The first chapter of The History of the Patriarchs by Severus of Ashmunein can be found at http://www.tertullian.org/fathers/severus_hermopolis_hist_alex_patr_01_part1.htm. Links from there take you to subsequent chapters.

2 Replies to “Persecution, New and Old”