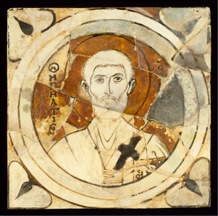 In the post on Tradition, I mentioned that the Orthodox (and Roman Catholics) derive their particular Christian tradition from the most ancient sources, and therefore from those sources closest to Christ. They strive to preserve a Tradition that has been faithfully passed down from generation to generation for nearly two thousand years. We know that this transmission has been relatively free of major change because we can go back to the writings of those who lived in the first centuries and compare. Where we find significant differences, we are dedicated to reviving the ancient tradition and eradicating the changes, wherever that is possible and necessary (we would not for example, insist that everyone learn to speak Greek because that is the language of the New Testament!)

Of course, Protestants aim to practice pure, ancient Christianity too, but they go about it in a very different way. For the Protestant, the catchcry is sola scriptura, ‘scripture alone!’ And of course, they are quite right in thinking that the Bible is the closest of sources to Christ Himself that we have available – historically speaking at least, although we would say we get even closer to Christ in the Eucharist, for example. But sola scriptura has problems as a basis for Christianity. For one, like the core Christian Creed we saw in the last post, the Bible must be interpreted. Apostolic and non-Apostolic Christians do not disagree about the authority of the Bible. What they disagree about is how interpret the Bible.

For example, when Jesus said “My flesh is food indeed and My blood is drink indeed” (John 6:55) did He mean us to take that literally? How are we to interpret His words? Did He mean us in some way to actually, physically, eat His body and drink His blood? Or was He just speaking metaphorically? Now the Protestants are in a dilemma here. As a rule, Protestants prefer the literal interpretation of a Bible passage over any other. For example, when they read, “… if you confess with your mouth the Lord Jesus and believe in your heart that God has raised Him from the dead, you will be saved” (Romans 1:9) they take that very literally: if you actually, physically and sincerely do those two things, you are saved. End of story. Nothing else required. That’s what the Bible says.

But then the Orthodox Christian might ask why it is that when we come to the passage about eating the body of Christ they do not apply the same criterion. Why do they not interpret that passage just as literally? It cannot be argued that the context does not suggest a literal interpretation. Consider the rest of the passage:

“The Jews therefore quarrelled among themselves, saying, “How can this Man give us His flesh to eat?”

It is hard to imagine a more direct command or instruction. Neither did the Jews hearing Him have any doubt that He was speaking literally of His actual flesh and blood:

Jesus did not call back those who left Him, those whose souls He had come to save, in order to explain to them that they had misunderstood Him, and that He really meant His symbolic flesh and blood, which would have been much easier to accept. He let them go, which can only mean that they had understood Him accurately, even if they could not accept what he had told them.

Now we could argue over whether this is the correct interpretation of the words, and no doubt the Protestant theologian can come up with an argument for the symbolic interpretation of the text, but in the end, the important thing surely is what Jesus actually meant when He spoke those words to His disciples? And surely, the best way to find that out would be to see what the first Christians understood from His words? The Apostolic Churches claim that this is exactly what we do, that our interpretation is actually the same as that of the first Christians. We take it as a matter of faith that this interpretation has been handed down accurately through the ages to the present day. But we can also actually prove this.

And the way to settle the question is to go back to the evidence from the first, second and third centuries. What did the first Christians write about the Eucharist? What did they practice? A couple of examples will suffice to illustrate the importance of going back to the ancient Fathers. The first passage was written by St Ignatius of Antioch who was born possibly as early as 35AD, died around the turn of the second century, and was a personal disciple of St John the Beloved Disciple. He wrote the following about those who rejected the teachings of the Christian Church:

“Take note of those who hold heterodox opinions on the grace of Jesus Christ which has come to us and see how contrary their opinions are to the mind of God … They abstain from Eucharist and prayer because they refuse to acknowledge the Eucharist is the flesh of our Saviour Jesus Christ, which suffered for our sins and which the Father by his goodness raised up again. They who deny the gift of God are perishing in their disputes.” (Letter to the Smyrneans, 6:2 – 7:1).

The second example is St Justin Martyr who was born around the time that St Ignatius died, between 100 and 110AD and was beheaded as a martyr for Christ around 165AD. In the following passage, written around 150AD, he describes an early Christian liturgy that is similar in form to ours and then goes on to say:

“We call this food Eucharist; and no one else is permitted to partake of it … For not as common bread nor common drink do we receive these; but since Jesus Christ our Saviour was made incarnate by the word of God and had both flesh and blood for our salvation, so too, as we have been taught, the food which has been made into the Eucharist by the Eucharistic prayer set down by Him, and by the change of which our blood and flesh is nourished, is both the flesh and blood of that incarnated Christ.” (First Apology 66).

These and other writings give ample evidence that the earliest Christians practiced a Eucharistic liturgy and meal, and that they fully understood themselves to be partaking of the flesh and blood of Christ in a very real way. The Eucharist is just one example of how studying the thought of the ancient Church can help us to know the right way to interpret the Bible. But we learn much more than Biblical interpretation from them! We see in their words and in their lives the same struggles and doubts that we face today, the same battle against the human tendency to selfishness, the same desire for all things noble and true and pure. They are our teachers, at whose feet we sit to learn how to be true followers of Christ. Many of them suffered great persecution for their Christian faith, some of them even died as martyrs. All of them devoted their lives to following the divine Teacher from Galilee. If we also wish to follow Him, we can find no better guides for our journey than those men and women.

The Orthodox Christian Church seeks to be as true and faithful to the original form of Christianity as possible, not only because we believe that is the purest and truest way to live Christianity, but also because it is important for us to know we are not alone. Christians today are part of a far larger community of Christians that stretches across the world and through the ages. That heritage will be the subject of the next post.

An excellent (though slightly Catholic-biased) source for the beliefs and practices of the ancient Christians in their own words is the three volume set, “The Faith of the Early Fathers” by W.A. Jurgens. If you wish to delve deeper into the lives and thought of the ancient Fathers of Christianity, Quasten’s four-volume work, “Patrology” is the standard text. The actual writings of the ancient Fathers are now freely available online, for example at the Christian Classics Ethereal Library: http://www.ccel.org .

9 Replies to “Being Orthodox 7: Apostolic and Patristic”