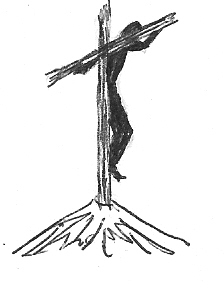 At the threshold of Passion Week, I present an excerpt from an archaeological article written in 1985 by Vassilios Tzaferis. He reported on the first ever finding of the remains of a victim of crucifixion, although of course, there is a great deal of written evidence that the practice of crucifixion was by no means uncommon in the ancient world. Here he presents a brief history of Crucifixion. I warn you, some of it is not very pleasant reading.

Many people erroneously assume that crucifixion was a Roman invention. In fact, Assyrians, Phoenicians and Persians all practiced crucifixion during the first millennium B.C. Crucifixion was introduced in the west from these eastern cultures; it was used only rarely on the Greek mainland, but Greeks in Sicily and southern Italy used it more frequently, probably as a result of their closer contact with Phoenicians and Carthaginians.

During the Hellenistic period, crucifixion became more popular among the Hellenized population of the east. After Alexander died in 323 B.C., crucifixion was frequently employed both by the Seleucids (the rulers of the Syrian half of Alexander’s kingdom) and by the Ptolemies (the rulers of the Egyptian half). Among the Jews crucifixion was an anathema. (See Deuteronomy 21:22–23: “If a man is guilty of a capital offense and is put to death, and you impale him on a stake, you must not let his corpse remain on the stake overnight, but must bury him the same day. For an impaled body is an affront to God: you shall not defile the land that the Lord your God is giving you to possess.”)

The traditional method of execution among Jews was stoning. Nevertheless, crucifixion was occasionally employed by Jewish tyrants during the Hasmonean period. According to Josephus, Alexander Jannaeus crucified 800 Jews on a single day during the revolt against the census of 7 A.D. At the end of the first century B.C., the Romans adopted crucifixion as an official punishment for non-Romans for certain legally limited transgressions.

Initially, it was employed not as a method of execution, but only as a punishment. Moreover, only slaves convicted of certain crimes were punished by crucifixion. During this early period, a wooden beam, known as a furca or patibulum was placed on the slave’s neck and bound to his arms. The slave was then required to march through the neighborhood proclaiming his offense. This march was intended as an expiation and humiliation. Later, the slave was also stripped and scourged, increasing both the punishment and the humiliation. Still later, instead of walking with his arms tied to the wooden beam, the slave was tied to a vertical stake.

Because the main purpose of this practice was to punish, humiliate and frighten disobedient slaves, the practice did not necessarily result in death. Only in later times, probably in the first century B.C., did crucifixion evolve into a method of execution for conviction of certain crimes. Initially, crucifixion was known as the punishment of the slaves. Later, it was used to punish foreign captives, rebels and fugitives, especially during times of war and rebellion.

Captured enemies and rebels were crucified in masses. Accounts of the suppression of the revolt of Spartacus in 71 B.C. tell how the Roman army lined the road from Capua to Rome with 6,000 crucified rebels on 6,000 crosses. After the Romans quelled the relatively minor rebellion in Judea in 7 A.D. triggered by the death of King Herod, Quintilius Varus, the Roman Legate of Syria, crucified 2,000 Jews in Jerusalem. During Titus’s siege of Jerusalem in 70 A.D., Roman troops crucified as many as 500 Jews a day for several months. In times of war and rebellion when hundreds and even thousands of people were crucified within a short period, little if any attention was paid to the way the crucifixion was carried out. Crosses were haphazardly constructed, and executioners were impressed from the ranks of Roman legionaries.

In peacetime, crucifixions were carried out according to certain rules, by special persons authorized by the Roman courts. Crucifixions took place at specific locations, for example, in particular fields in Rome and on the Golgotha in Jerusalem. Outside of Italy, the Roman procurators alone possessed authority to impose the death penalty. Thus, when a local provincial court prescribed the death penalty, the consent of the Roman procurator had to be obtained in order to carry out the sentence. Once a defendant was found guilty and was condemned to be crucified, the execution was supervised by an official known as the Carnifix Serarum.

From the tribunal hall, the victim was taken outside, stripped, bound to a column and scourged. The scourging was done with either a stick or a flagellum, a Roman instrument with a short handle to which several long, thick thongs had been attached. On the ends of the leather thongs were lead or bone tips. Although the number of strokes imposed was not fixed, care was taken not to kill the victim.

Following the beating, the horizontal beam was placed upon the condemned man’s shoulders, and he began the long, grueling march to the execution site, usually outside the city walls. A soldier at the head of the procession carried the titulus, an inscription written on wood, which stated the defendant’s name and the crime for which he had been condemned. Later, this titulus was fastened to the victim’s cross.

When the procession arrived at the execution site, a vertical stake was fixed into the ground. Sometimes the victim was attached to the cross only with ropes. In such a case, the patibulum or crossbeam, to which the victim’s arms were already bound, was simply affixed to the vertical beam; the victim’s feet were then bound to the stake with a few turns of the rope. If the victim was attached by nails, he was laid on the ground, with his shoulders on the crossbeam. His arms were held out and nailed to the two ends of the crossbeam, which was then raised and fixed on top of the vertical beam. The victim’s feet were then nailed down against this vertical stake.

Without any supplementary body support, the victim would die from muscular spasms and asphyxia in a very short time, certainly within two or three hours. Shortly after being raised on the cross, breathing would become difficult; to get his breath, the victim would attempt to draw himself up on his arms. Initially he would be able to hold himself up for 30 to 60 seconds, but this movement would quickly become increasingly difficult. As he became weaker, the victim would be unable to pull himself up and death would ensue within a few hours.

In order to prolong the agony, Roman executioners devised two instruments that would keep the victim alive on the cross for extended periods of time. One, known as a sedile, was a small seat attached to the front of the cross, about halfway down. This device provided some support for the victim’s body and may explain the phrase used by the Romans, “to sit on the cross.” Both Erenaeus and Justin Martyr describe the cross of Jesus as having five extremities rather than four; the fifth was probably the sedile. To increase the victim’s suffering, the sedile was pointed, thus inflicting horrible pain.

The second device added to the cross was the suppedaneum, or foot support. It was less painful than the sedile, but it also prolonged the victim’s agony. Ancient historians record many cases in which the victim stayed alive on the cross for two or three or more days with the use of a suppedaneum. The church father Origen writes of having seen a crucified man who survived the whole night and the following day. Josephus refers to a case in which three crucified Jews survived on the cross for three days. During the mass crucifixions following the repression of the revolt of Spartacus in Rome, some of the crucified rebels talked to the soldiers for three days.

The Crucifixion was a mode of death that symbolised the horror of man’s power over man. The very fact that human beings could do such terrible things to each other reveals the dark and frightening depths of the evil into which the human heart can plunge. How could we become like this? This behaviour is worse than that of animals, who kill only for food.

This IS the reality of the human heart apart from the God of love.

For this reason did our God become man: to reveal these truths, and to offer us a way out …

One Reply to “Biography of Crucifixion”