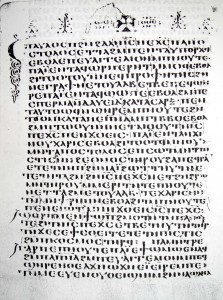 The language, I mean. It is a beautiful thing in itself, and it also opens doors to new dimensions of spiritual growth. When I hear it, I like to think about the words echoing down from at least 5,000 years ago, changing slightly every few centuries to be sure, but still their essence continues from generation to generation, through historical periods as diverse as that of the Hyksos and the Turks (who both ruled Egypt at different times). I imagine an Egyptian peasant chatting idly with his friend on a felucca on the Nile as they drift lazily past the temple of an ancient god, or kindly father gathering his wife and children around him on the roof at evening to pray and read the Bible to them in Coptic.

My son recently introduced me to a Bible system you can download for free called “e-sword” (www.e-sword.net). I already have two Bible programmes on my computer, so I wasn’t very excited, until he told me you can also download the Bible in heaps of unusual formats. So now, I have the Septuagint in Greek, the Old Testament in Hebrew and best of all: the Bible in Sahidic Coptic! OK, I can’t read Hebrew, and I’m on my L plates with Koine Greek, but these versions have little links for each word so that if you hover your mouse over it, it gives you an instant dictionary definition of the word.

Reading the Bible in another language often provides insights into the finer shades of meaning, especially if it’s in the original language used to write it in the first place. I use the Hebrew and Greek versions when I want to get to the bottom of a tricky or uncertain verse, or when I want to discover some of the alternative definitions of the words used that haven’t translated across to the English. For example, there are four different words in Greek that are all translated into the English language as “love”, and each one has a different meaning. CS Lewis has a famous book about this topic called The Four Loves.

There’s more: reading the Bible in Coptic tells me a little about how our ancient forefathers (and mothers) interpreted the Bible. A translation can tell you a lot about the translator. Many words in one language will have no directly equivalent word in another language, so the choice of words, the choice of shades of meaning in the translation tells you what the translator thought was most important in the original. Reading it in Coptic, you can imagine St Anthony walking into the Church as a young man and hearing those exact Coptic words thundering down from the lectern to pierce his heart with longing to follow Christ. The way the phrases are structured in Coptic builds a slightly different picture in my head to that I get when I read it in English.

That’s also why I pray a Coptic liturgy every Thursday. I’m still learning, so it’s only about three-quarters Coptic so far, but growing. There is something different about our liturgy when it’s prayed in Coptic. Perhaps it is because the melodies were made for these words. Or perhaps again it is the sentence structure and the use of the specific words chosen. I am not sure, but I do know that the Coptic liturgy is a precious jewel in our treasure box of Coptic heritage. It needs a lot of effort to learn the language and come to appreciate it, but in my experience, it is effort that is rewarded many-fold.

And finally, there are those who wish to bring Coptic back to life. What a great thing that would be! There are virtual communities out there, such as Remenkimi, who regularly communicate in Coptic – that’s right, they exchange Coptic language emails. Anyone who’s interested in learning more about Coptic will find a wealth of information at their website (www.remenkimi.com).

A word of warning: while the learning and use of Coptic in our spiritual lives can be greatly beneficial, some people can take it a bit too far and become fanatical about it. Coptic should never be forced upon people – it should be a choice they can make if they wish to. There are many who know not the slightest scrap of Coptic and still enjoy deeply fulfilling lives within the Coptic Church, and that is as it should be, for our Church is about Christ, after all, not a human language or culture. It may not be for everyone, but learning Coptic is worthwhile for those who are interested in languages, and those who are interested in authentically experiencing the ancient and unique Coptic spiritual heritage in all its native glory.

No votes yet.
Please wait…